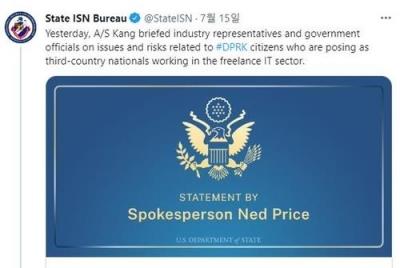 US official warns against hiring Korean IT workers posing…

Seoul, July 16 (IANS) A senior US official has briefed industry and government officials on the risks associated with hiring North Koreans who pose as third-country citizens working in the information and technology (IT), according to a State Department office. .

CS Eliot Kang, assistant secretary of the Office of International Security and Nonproliferation, met with these officials on Thursday (Washington time), the office tweeted, warning of risks including intellectual data theft, legal consequences and reputational damage.

The warning came as Seoul and Washington step up security coordination to curb provocative acts by Pyongyang over fears the recalcitrant regime could further escalate tensions by carrying out a nuclear test, the agency reported. Yonhap press.

“They often target the richest countries with the highest salaries, while deceptively hiding their true nationality,” he added.

The office reiterated Washington’s continued dialogue with Pyongyang, but stressed its commitment to disrupting the North’s “illicit revenue-generating activities around the world.”


Legal disclaimer: MENAFN provides the information “as is” without warranty of any kind. We assume no responsibility for the accuracy, content, images, videos, licensing, completeness, legality or reliability of any information in this article. If you have any complaints or copyright issues related to this article, please contact the provider above.