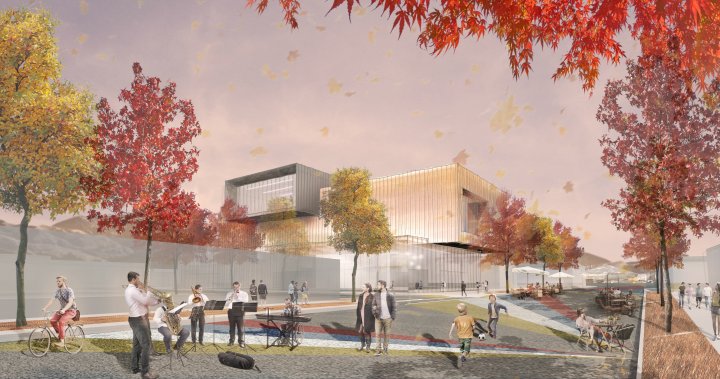 The North Okanagan Regional District uses the other approval process to provide funding for the Center culturel du Grand Vernon.

On Tuesday, the RDNO released a statement about its goals and construction milestones for the downtown Vernon project, which was originally estimated at $40 million but is now pegged at $28 million.

Stemming from 2016 plans to increase the cultural vitality of the neighborhood, the center will house a new art gallery, flexible performance space and a new museum.

In 2018, voters passed a referendum to borrow $25 million for the multipurpose facility, with the RDNO hoping to raise the remaining $15 million through donations and grants.

However, the regional district announced last fall that it was cutting the project to $28 million after failing to secure the necessary grants.

The cultural center in Vernon, British Columbia, will be reduced after being rejected for subsidies

“The strategy to secure this amount of money included obtaining grants from higher levels of government, borrowing up to $25 million and fundraising,” the regional district said in the press release. of Tuesday.

“The RDNO did not receive the major grants for which it had requested, and since voter approval to borrow $25 million received by referendum in 2018 was conditional on obtaining these grants, the RDNO is proposing a different path for the construction of the Cultural Centre.

1:35
A parking lot in Vernon to become a Cultural Center

Seventeen sentences into the press release, the Regional District announced its intent: “The RDNO Board of Directors is now seeking voter approval to pass a by-law giving the RDNO authority to borrow these funds through an alternative approval process (AAP). If voter approval is received, the RDNO will proceed to the design phase.

Also known as a counter-petition, the alternative approval process puts the onus on those against the motion, and usually under tight deadlines. The process requires that at least 10% of eligible voters submit a form of objection by the deadline.

If less than 10% of eligible voters submit a form of objection by the deadline, the motion passes — in this case, borrowing $28 million over 20 years. But if more than 10% vote against, the motion is then put to a public referendum.

The deadline for filing an objection form is Monday, May 2 at 4 p.m.

“If the RDNO receives Voter Response Forms signed by 10% (5,635 voters) or more of eligible voters, it cannot pass By-law 2910 without receiving voter approval in a subsequent referendum,” the regional district said.

“Because the AAP mechanism only counts the opposition, no action is required from eligible voters who are in favor of the proposal.”

More information on the PAA of the Center Culturel du Grand Vernon is available on the RDNO website.