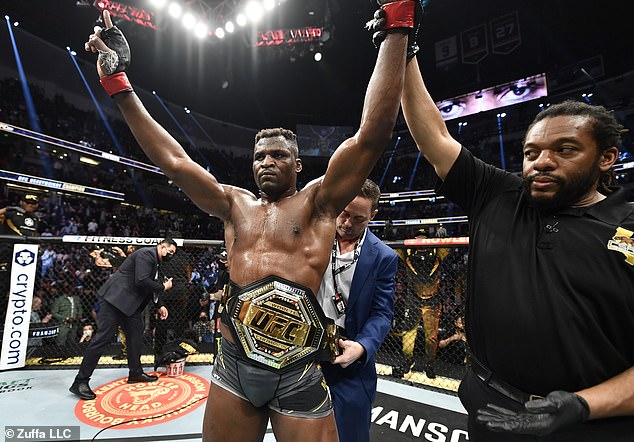 UFC heavyweight champion Francis Ngannou reveals he had to borrow money to LIVE…518,000 in his last fight

By Will Pickworth for Mailonline

UFC heavyweight champion Francis Ngannou has said he won’t sign a new contract with the UFC until certain conditions are met and revealed he had to borrow money. money to live on for the past two years.

The 36-year-old hasn’t fought since January, after suffering a torn MCL while retaining his UFC Heavyweight Championship against Cyril Gane in what was believed to be the final bout of his UFC contract.

And the Cameroonian star has now claimed he will not sign an extension to that previous deal.

He said MMA hour: ‘No, I have not signed a new contract. First of all, I have a champions clause and I tried to press but I’m not signing a new agreement.

Despite earning £518,000 in his last fight, the Cameroonian star went on to highlight the lack of security provided by his previous contract and made a startling admission about the impact it had on him.

He added: “In the past two years I have fought twice and then I have to borrow money to live!”

‘Nobody cares. I have no guarantees that year and I have no protection, so based on that experience I want to get something better on my contract and obviously what I deserve.

This isn’t the first time the Cameroonian star has spoken out about how he and his fellow MMA fighters are poorly rewarded.

Last month, he took to Twitter to talk about UFC uniform policies amid the debate over fighter pay in the organization.

In a series of tweets, Ngannou explained that he believes the fighters are currently being “ripped off” by the promotion in terms of sponsorships.

The debate surrounding fighter compensation has intensified in recent weeks and months, fueled by comments from UFC President Dana White during a recent interview in which he claimed that an increase in compensation “will never happen” during his time at the helm of the promotion.